Showing posts from November 5, 2019
Show all

How Noah Solved the Climate Crisis© 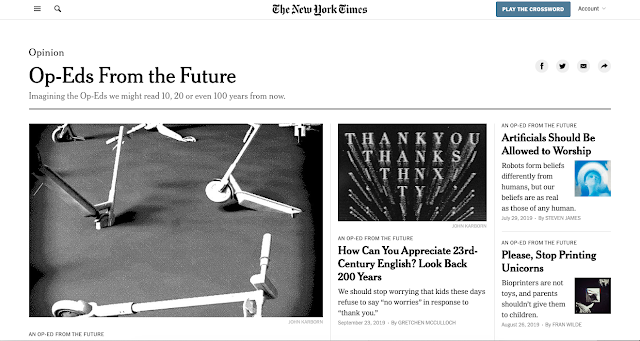 There is a little known webpage on the New York Times website called, Op-Eds From the Future.  It is a series in which science fiction authors, futurists, philosophers and scientists write Op-Eds that they imagine we might read 10, 20 or even 100 years from now. Here goes my attempt at news from the future:

Griffin Musk, son of famed co-founder of SpaceX Elon Musk, Fulfills Father’s Dream and Shoots for the Stars!   November 2, 2060
“Griffin Musk took over his father’s company in 2040, and hasn’t looked back.  His goal was to achieve his father’s dream, to leave Earth for Mars.  His father famously said, ‘You want to wake up in the morning and think the future is going to be great - and that's what being a spacefaring civilization is all about. It's about believing in the future and thinking that the future will be better than the past. And I can't think of anything more exciting than going out ther…
Post a Comment
Read more
More posts